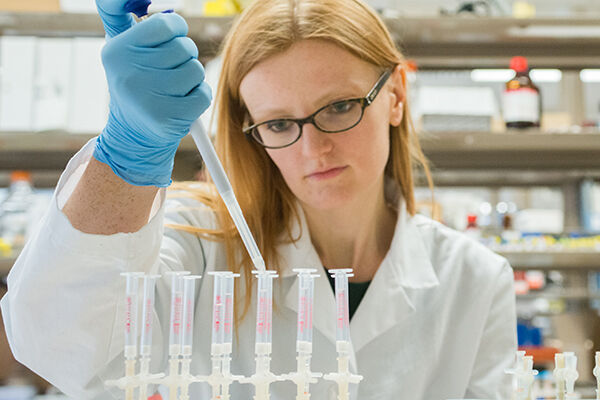 The process of developing a new therapeutic is long, expensive, and risky. The average new therapy has been estimated to take 9 years1 and cost $1B+2, 3 to take from bench to bedside, and only ~10%4 of INDs are ultimately approved by the FDA. Currently, researchers and drug developers use laboratory raised animals, usually mice, as disease models to help validate their drug before entering human trials. For academic investigators trying to advance a therapy to human trials, the high risk of failure makes raising sufficient funding for human studies based solely on small animal studies challenging. One option to efficiently and relatively inexpensively improve investor and investigator confidence in a pre-clinical therapeutic is to perform clinical trials in outbred dogs.

Pet dogs get many of the same diseases that humans do, and these diseases often look very similar both clinically and biologically between the species. Unlike laboratory animals, pet dogs develop diseases spontaneously, without any artificial genetic or chemical manipulation, and they develop diseases in the same environment that humans do. Moreover, dogs are genetically closer to humans than mice. All of these characteristics of dogs potentially make them a better model for human disease. Given that there are 70-80 million dogs in the US and ~25% of them will die of cancer, pet dogs are an excellent and easily available model for human disease.

Besides being great models of diseases, dogs are an efficient way to quickly evaluate therapeutic efficacy. Animal biologics are regulated by the USDA, not the FDA, and frequently have a less complicated and significantly faster pre-clinical review process than human studies. Entering canine patients into a trial requires only IACUC approval and owner consent and can be prepared and ready to go in a matter of weeks to months. Because dogs have a much shorter life span than humans, ageing 5-8 times faster than humans, their diseases often progress faster, making for a more rapid evaluation of efficacy. Moreover, pet owners love their dogs, and tend to be very eager to enroll them in clinical trials, making finding sufficient numbers for trials very feasible.

One example where this model has been used is by Advaxis, a clinical stage biotechnology company that focuses on developing cancer immunotherapies, using a Listeria monocytogenes-based platform technology. After generating a large amount of data in mice with a Listeria-based immunotherapeutic that expresses HER2/neu (ADXS31-164), they used pet dogs to further investigate the efficacy of ADXS31-164 in osteosarcoma. Osteosarcoma in pet dogs looks clinically, biologically, and molecularly very similar to that in humans and is often associated with the expression of the same HER2/neu protein, making it an excellent model. Advaxis thus funded a trial at the University of Pennsylvania School of Veterinary Medicine to test their ADXS31-164 vaccine in dogs, which demonstrated that the vector prolonged disease-free survival and was safe and well-tolerated5. These data have contributed to the ease at which the company has moved forward and raised money for human trials of the vaccine targeting HER2/neu in human cancers, including pediatric osteosarcoma.

While dogs may not be a perfect model for human disease, there are many diseases for which they can be a great model. For investigators struggling to raise money for human development of a promising pre-clinical finding, pursuing large animal trials may be a relatively inexpensive way to improve confidence in their therapy and help pave the way for human trials.

Back to the homepage